Researchers from the Department of Energy’s SLAC National Accelerator Laboratory have discovered a strange new feature of a protein that’s thought to be important in the development of tuberculosis: The protein contains a “huge” interior pocket, the likes of which has never before been seen, that appears capable of passing a wide range of other molecules into the bacterial cell.

Cornelius Gati, a structural biologist at SLAC, discovered the pocket while investigating the role this “transporter protein” on the surface of tuberculosis bacteria plays in sucking up vitamin B12 from surrounding cells. As far as anyone knew, transporter proteins that import molecules into cells tend to be quite specialized, with nooks and crannies tailored to grab onto particular molecules and move them into cells. This one, Gati found, was a generalist that could in principle bring in small nutrients, larger molecules like vitamin B12 or even some antibiotics.

In theory, the new findings could lead to new ways to treat tuberculosis, but the for the moment Gati and colleagues are simply trying to get a better handle on what the protein can and cannot transport—as well as what purpose such an odd protein might serve.

“We’ve never seen anything like this before,” Gati said. “It doesn’t really make sense.”

The research, which Gati performed in collaboration with researchers at the University of Groningen, Stockholm University, and the Moscow Institute of Physics and Technology, was published March 25 in the journal Nature.

Although tuberculosis is largely a thing of the past in the United States, it remains a serious public health threat in other parts of the world. There were 10 million new cases in 2018, and 1.5 million people died from tuberculosis that year alone, according to the World Health Organization. Worldwide, it remains one of the top 10 leading causes of death, the leading cause of death from infectious disease and the leading cause of death for people with HIV.

Yet Mycobacterium tuberculosis, the bacterium that causes tuberculosis, remains relatively poorly understood, as does the process of turning a tuberculosis infection into active disease. In the United States, for example, around 13 million people are infected with the bacteria, but only about one in 10 will ever actually develop the disease, and no one is quite sure why.

One clue to understanding the disease concerns the tuberculosis bacterium’s uptake of vitamin B12, a step that seems to be crucial for the bacteria’s survival and for the shift from TB infection to disease. How the bacteria imports the vitamin, however, was a mystery. Researchers could find no transporter protein in the bacterium’s outer membrane that was dedicated specifically to vitamin B12. The one Gati and team studied had been linked via genetic studies to B12 uptake, but it was known for shuttling an entirely different class of molecules, including the antimicrobial bleomycin. Still, Gati and team knew that the protein and its connection to B12 was essential. “Without this transporter, tuberculosis bacteria cannot survive,” Gati said.

To get a handle on the transporter protein’s structure, Gati turned to cryo-electron microscopy. Known as cryo-EM for short, the technique involves freezing molecules in place so that they can be studied in more or less their natural state under an electron microscope. Although the technique was first developed in the 1970s, a series of advances in the last few decades have made it more and more practical to use the technique to study biological molecules.

Still, when Gati took images of the transporter protein and analyzed the data, he was not entirely prepared for what it was about to show him. Rather than uncovering a hidden nook tailored to vitamin B12, cryo-EM revealed a cavity within the transporter roughly 8 cubic nanometers in size—a tiny volume by our everyday standards, but absolutely enormous in the context of transporter proteins. The pocket could easily fit a number of water molecules, vitamin B12 and perhaps many other molecules.

That generalist nature is particularly exciting, said Laura Dassama, a chemist at Stanford University and Stanford ChEM-H. “We have seen transporters that move a variety of drugs and molecules out of a cell, with little specificity, but not importers. If this is really an importer that can recognize and import multiple unrelated molecules, that would be fantastic” and might suggest a way to move antibiotics into the tuberculosis cell.

Although the most tantalizing possibility is that the transporter protein discovery could lead to new treatments for the disease, Gati said the team still doesn’t know what exactly their molecule can and cannot transport. While they have a sense of what can fit inside the cavity, for example, they still do not know what can get in and out. So far, the team has only been able to observe the cavity in its closed state. To figure out what can actually get into the cavity and back out again, the team needs to catch the cavity with its doors open.

Even then, the team will not know what the molecule actually does transport in practice. Future structural studies and biochemical screens, Gati said, could help answer those questions, although they will not be easy: Tuberculosis bacteria tend to grow and reproduce very slowly, which in turn hampers the methods scientists would normally use to study transporter molecules.

But even if Gati and his colleagues figure out exactly what their molecule is doing, there remain deeper questions: Why did nature cook up this molecule and its enormous interior cavity, why are such molecules so rare, and what purpose do they serve? On one hand, a cavity like the one the team has discovered is an “Achilles heel,” particularly if it can help transport tuberculosis-killing antibiotics. On the other hand, it remains possible there is some evolutionary advantage to the structure.

“That is the million-dollar question,” Gati said. 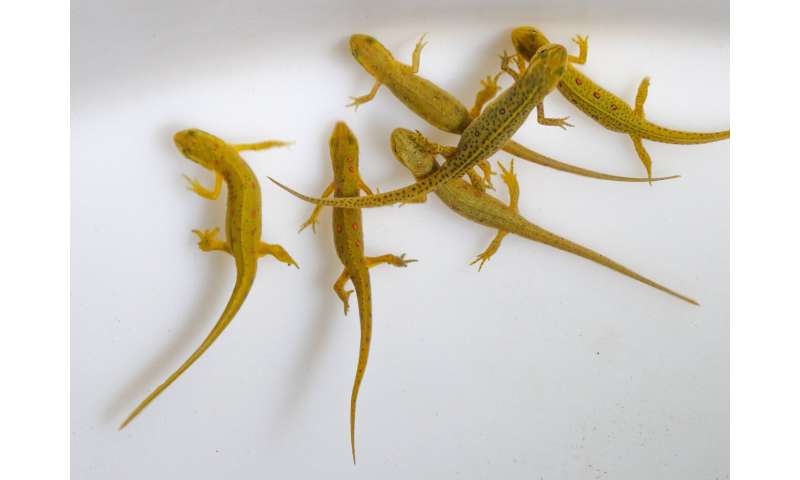 New information about the transmission of the amphibian pathogen, Bsal

The strategy of social distancing currently being used to mitigate the COVID-19 pandemic also works to reduce the rate of Bsal transmission among newts. A University of Tennessee Institute of Agriculture study shows that reducing host contacts by either reducing... This is a decorated egg from the Isis Tomb, Vulci, Italy. Credit: © Tamar Hodos, University of Bristol (with the permission of the Trustees of the British Museum) Research reveals surprising complexity of ancient ostrich egg trade. An international team... 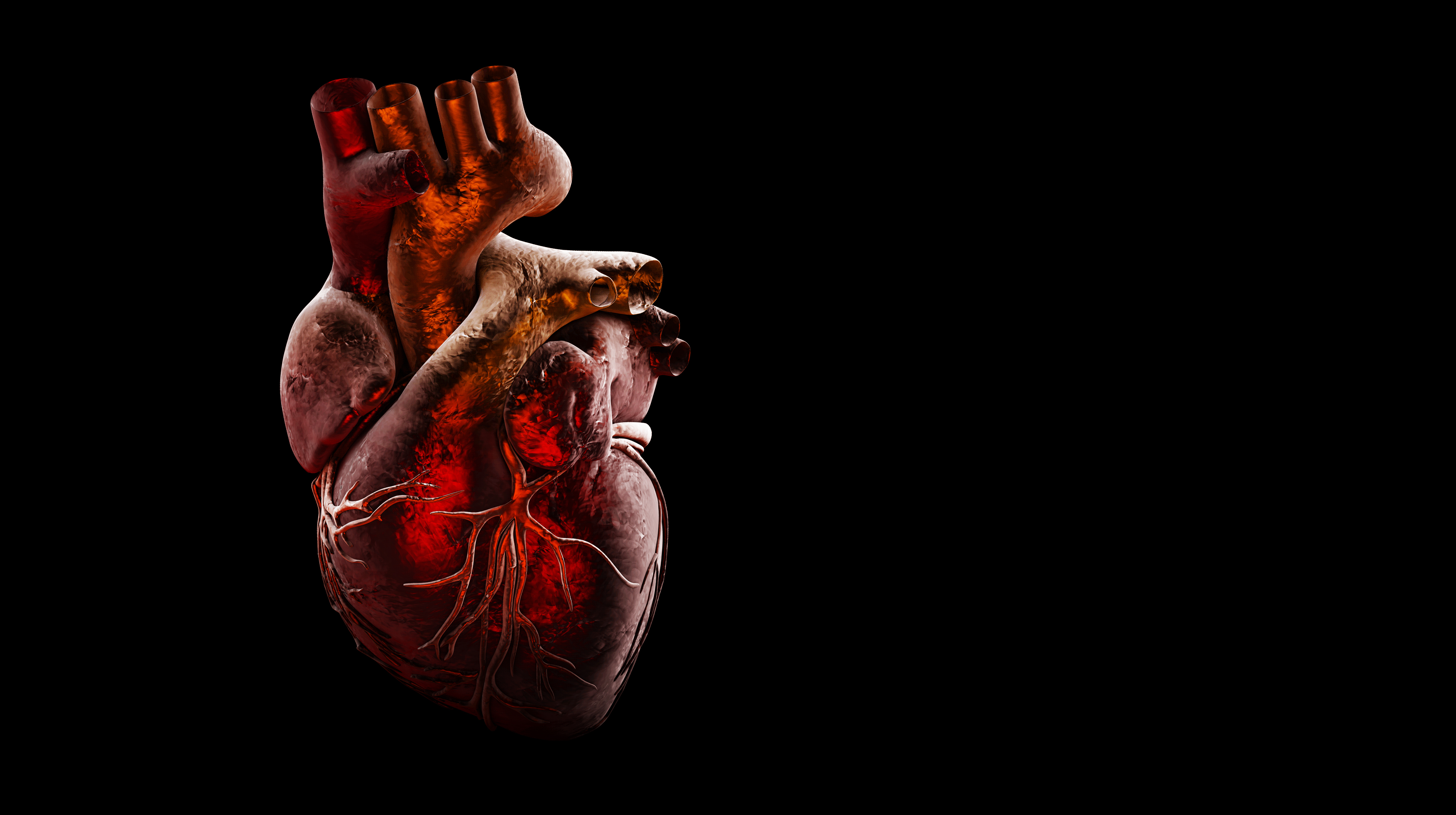 The novel coronavirus mainly attacks the lungs. But doctors have been increasingly reporting cases of another battlefield raging within the body: the heart.More than 1 in 5 patients develop heart damage as a result of COVID-19 in Wuhan, China, one... 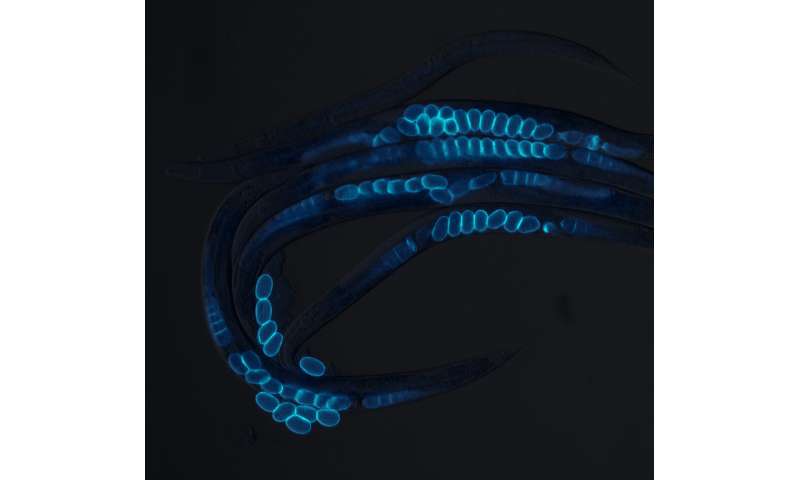 Short:A Northwestern University study of the roundworm C. elegans found the health of the fertilized embryo determines the functional health of the mother.Long:Progeny quality regulates proteostasis and stress resilience in reproductive mothers with implications for cellular and organismal health. This... In the ground state the magnetic moments are either upward or downward, the spins antiparallel to the external magnetic field (red) are never together (right). By excitation, further spins can align antiparallel and Bethe chains are formed (white spins, left)....

Colombia asks IMF for $11 billion to help with economic crisis

New information about the transmission of the amphibian pathogen, Bsal